What a you looking for?

Raposiñas is a rural ceramic studio.

Our designs are inspired by concepts that shape tangible craftmanship: The house, the vegetable garden, the game. Memory. The sea and the coast. Rain and drought. Wordwide and locally.
Our baking methods emulate natural geological processes. We mix mineral compounds and bake them at high temperatures, avoiding synthetic materials.
We aim to create an intimate visual and tactile bond with our craft by experimenting with soft overlays of a highly sensitive nature.
We are extremely proud to offer truly especial objects shaped by subtle organic lines with primitive decorations and rustic appeal.
We are an industrious independent ceramic studio committed to embellishing the cotidianity of the world around us. 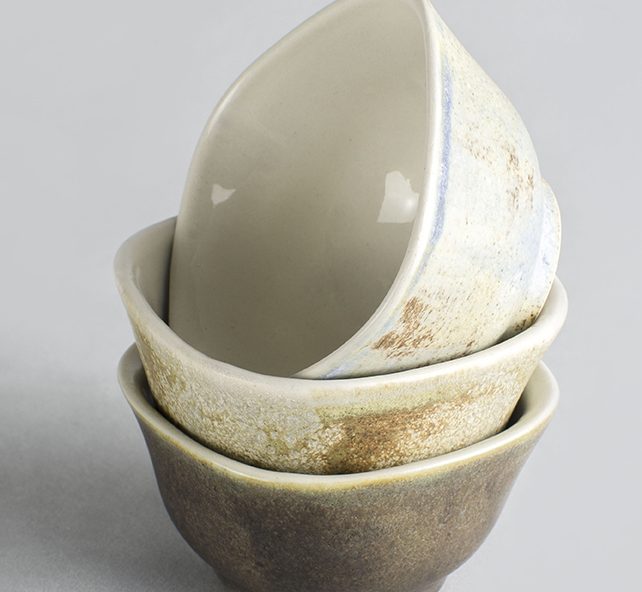 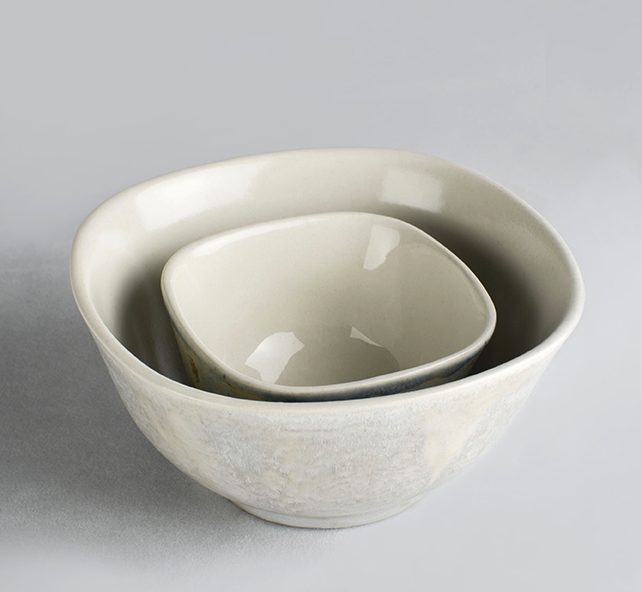 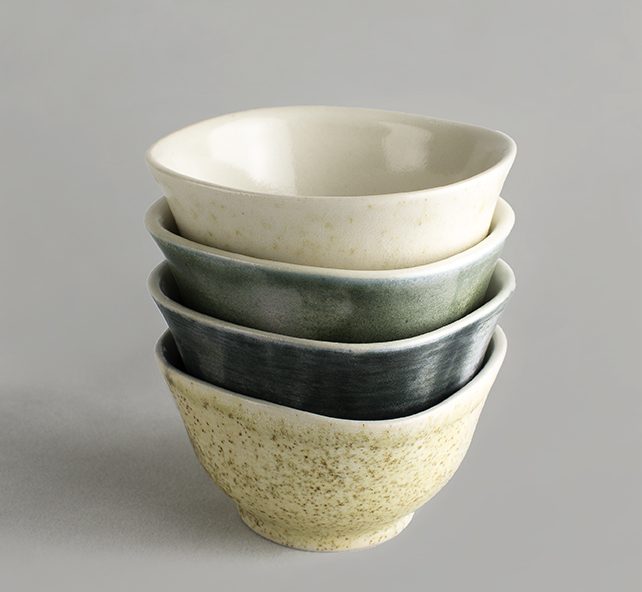 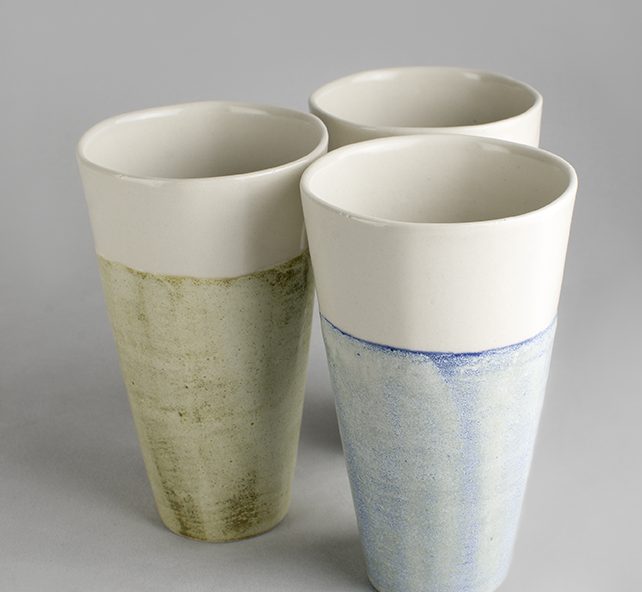 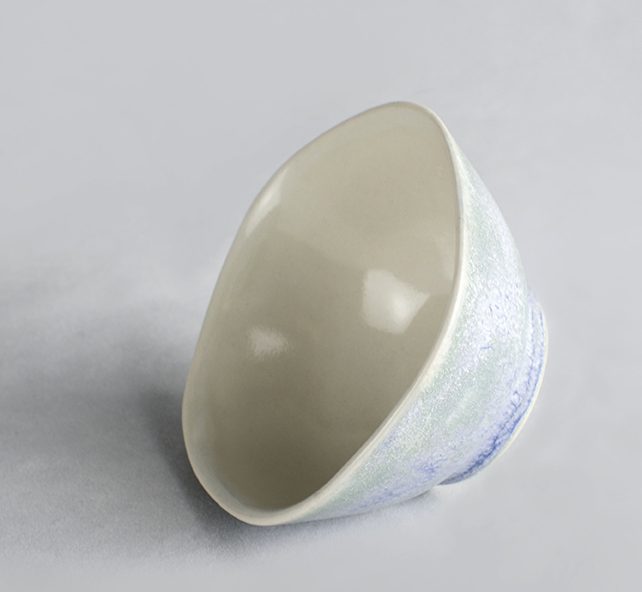 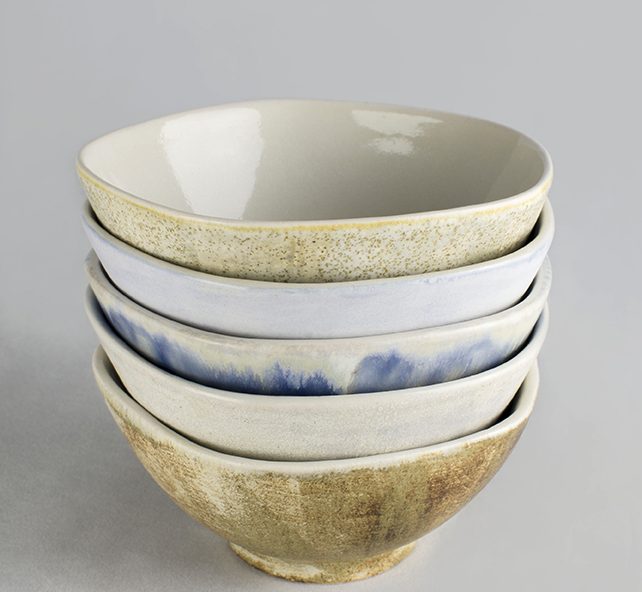 Until recently our workshop was a garage. The garage. It had been built by my grandfather so that my mother could keep one of the first cars in our village, a yellow Renault 5.
In our council, A Pobra do Caramiñal, we lack a pottery tradition. In this house, the first cooking and warps had to do with “empanadas”. The first forms and contents were related to potatoes and long walks. We are a new workshop and do not have a background other than our memory, the heart of our project.
We work at “Os Raposiños’ Street, close to the namesake beach. We are a team of four people: Loaira Davila and Martín Hortas, both with a Bachelor’s Degree in Fine Arts, conceive, manufacture and fire the pieces. Abelardo P. Santiago, industrial designer, sketches and make our ideas possible. Melo Pérez, with a Bachelor’s Degree in Business Administration, manages and administers our workshop. 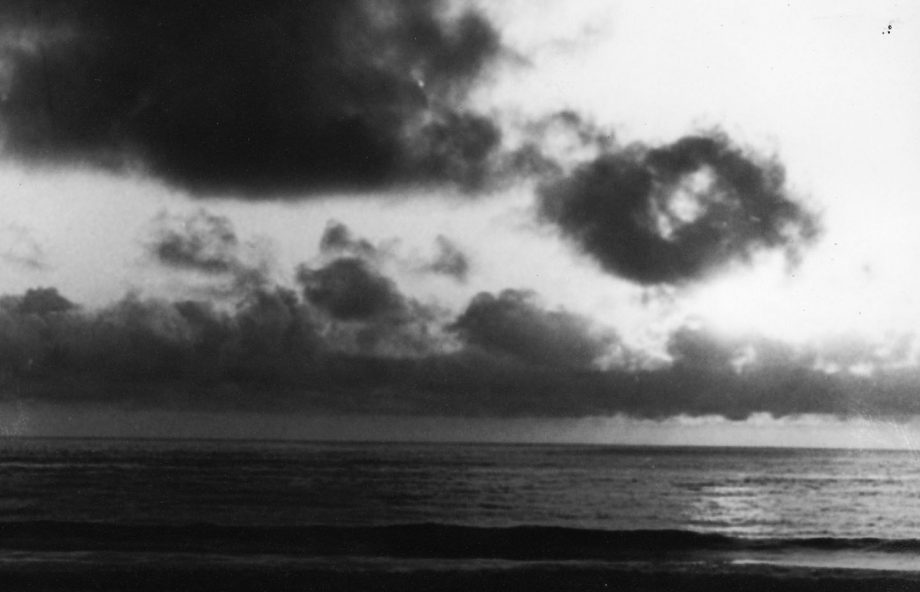 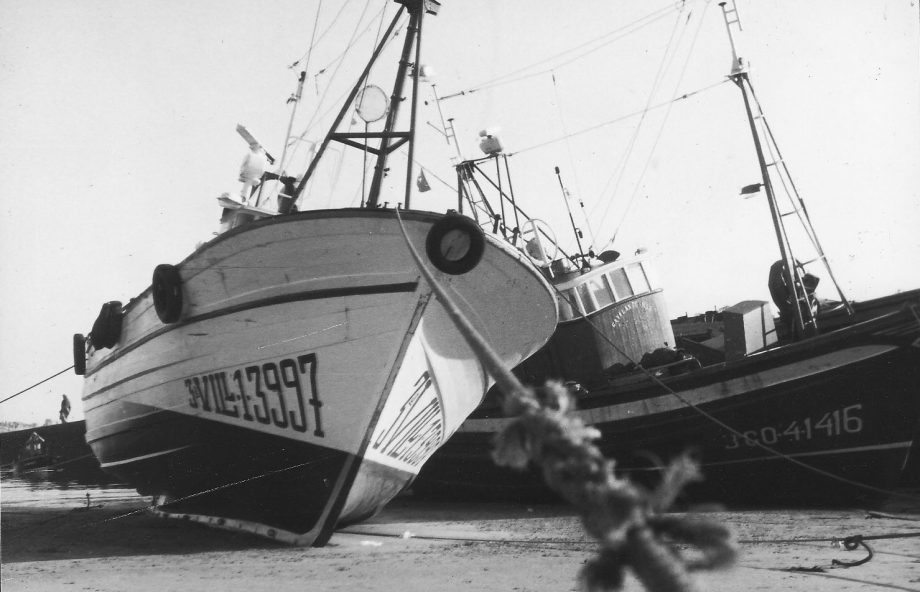 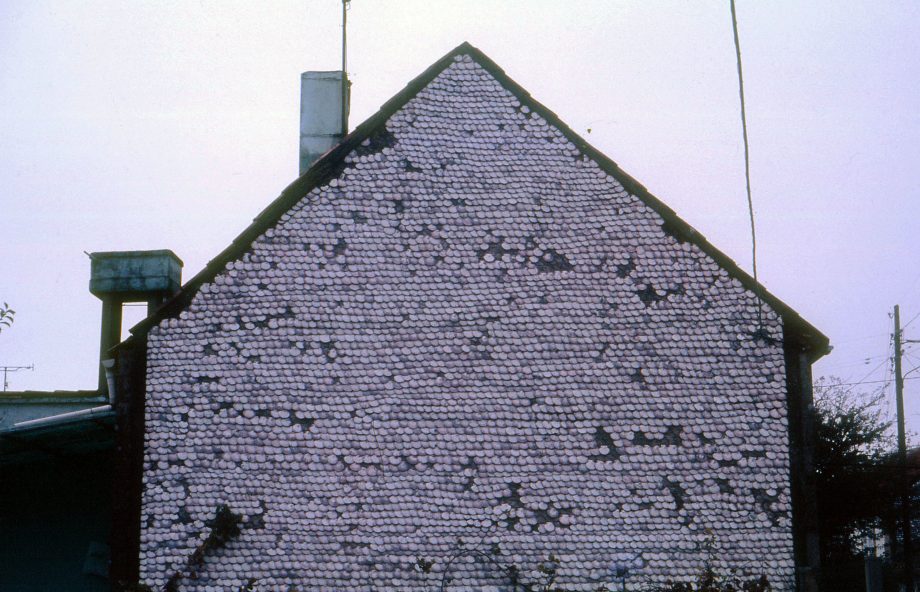 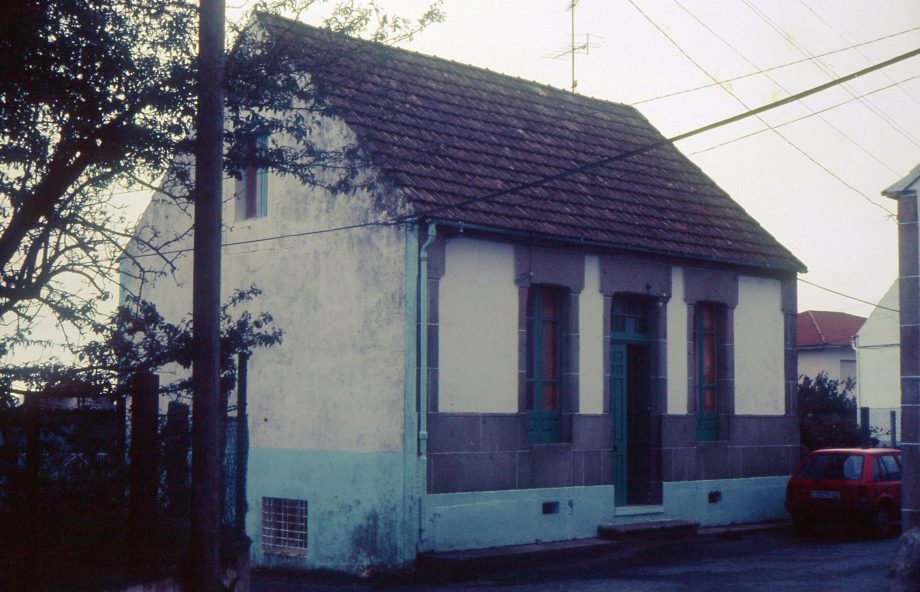 Our grandmother in A Lomba gave us the leftover cuts of dough when she cooked pies, so that we could play with shapes and bake them. Therefore, we are used to model with our hands since we were very young. We do it with the same affection as our grandmother added sugar to that dough just to make it tastier.
We start from clay sketches that we digitally modulate and plot with 3D and PLA printers. With these imprints, we create plaster molds where we set stoneware and local clays. Sometimes, we distort manually the pieces to produce organic shapes.
We also manufacture unique hand-made pieces through the production of warps and clay and stoneware sheets. On some occasions, we create molds as well.
We produce lacquers with mineral raw materials. We alternate different layers, so every piece is original. Quartz, kaolins, ashes, and earths form our environment allow us to create special and sustainable materials. 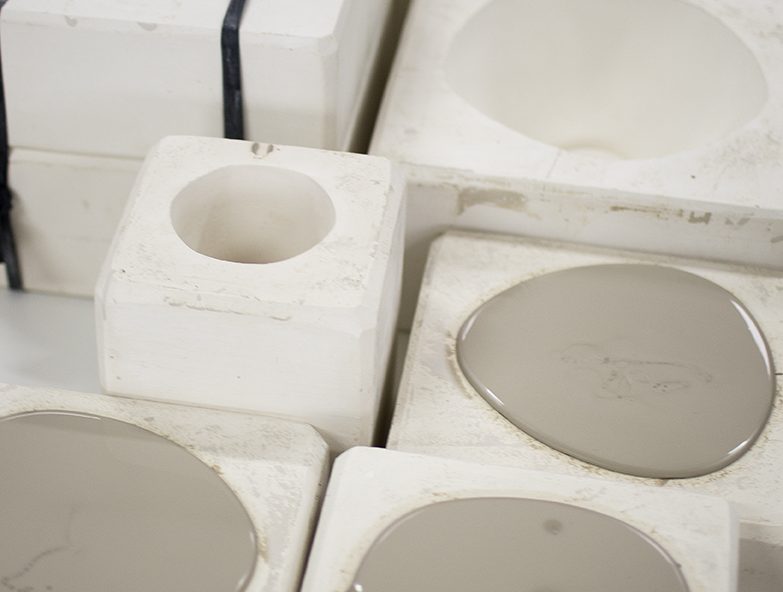 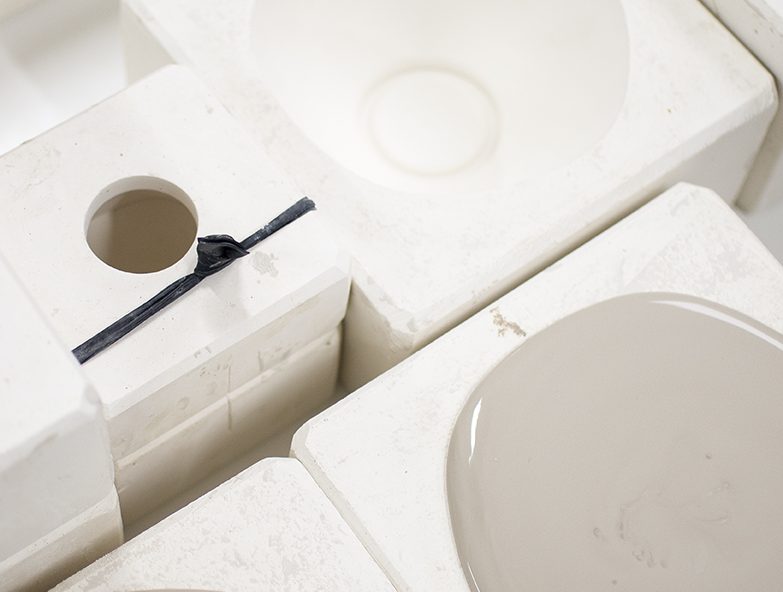 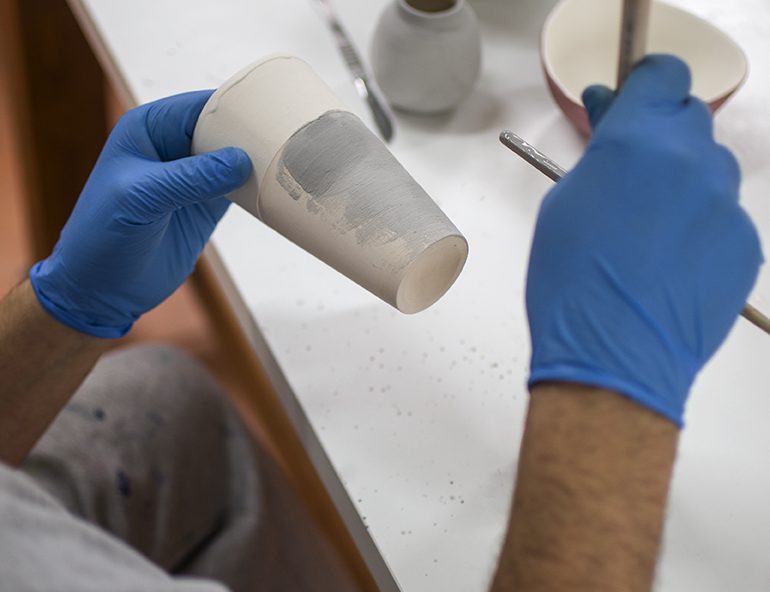 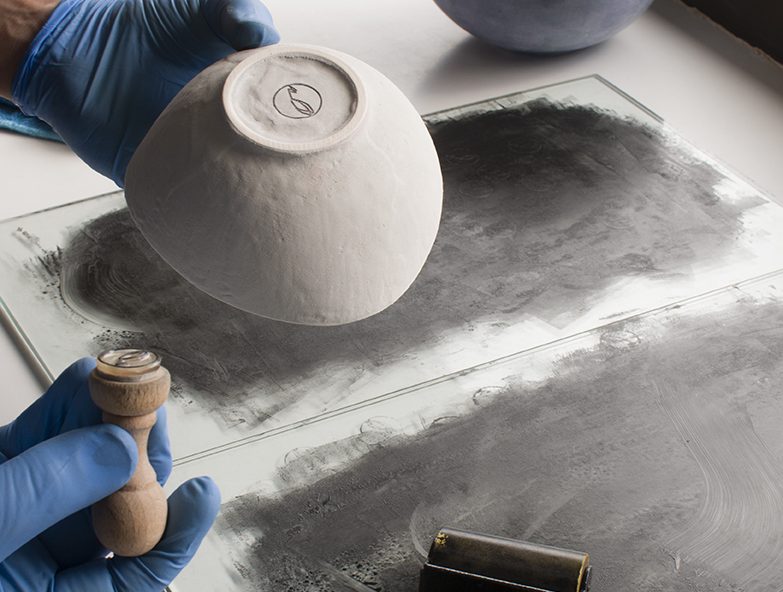 Mercedes Santiago’s granddaughter and Lola Davila’s great-granddaughter, Loaira was born in A Lomba, in the same house where she currently lives and works. She studied Design at Mestre Mateo, Pictoric Conservation at Escola Superior de Restauración e Conservación de Bens Culturais de Galicia and Fine Arts at the University of Vigo. During her third year, she received a scholarship to study at the National University of Buenos Aires, where she experimented with the arts of fire. After finishing, she started a Master’s Degree in Ceramics: Art and Capacity at Euskal Herriko Unibertsitatea, in Bilbao. There, she met several teachers and artistic referents such as Ana Felipe Royo and Izaskun A. Gainza. Her Master’s Thesis, La Casa, served as a plan to create this pottery workshop based on the concepts of dwelling and family. One year later, that project materialises, and a new period begins in the starting point.

Born in Santiago de Compostela, Martiño grew up looking at the Catoira stuary. He studied a Bachelor’s Degree in Fine Arts at the University of Vigo where he received a scholarship to study in Brasil. This event had a major influence on his work and life. He is a self-taught that moves among different artistic disciplines. His work is a mixture of contemporary art, popular Galician traditions and electronics. He decomposes all kind of objects (electronic pieces, do-it-yourself materials, natural elements…) and reuses them to create new objects ranging from musical toys to basic tattoo machines. His influences are graffiti, urban art and “Doo-rags” while rural and popular culture are always present in his work.

Mercedes Santiago and Abelardo Perez’s son, Abelardo, was born in A Lomba, in his family home. Since childhood, he was gifted in the arts of sculpture and drawing. When he was sixteen years old, he started his studies at Mestre Mateo, where he improved his skills. Later on, he studied Industrial Design at the University of Vigo, which allowed him to join the academic and technical drawing and become the master of the sketch he is nowadays. Years later, he started the 3D Design Studio “A Caramecha” where he designs industrial machinery, classic cars bodywork, “dornas” and even planes. Nowadays, he digitally designs the pottery pieces and carves the most beautiful tools with the most precious woods.

Born in O Maño, Melo studied Business Administration in Lugo. Years later, he managed several companies. He was one of the founders of the Cultural Association A Misarela and always loved photography, history, toponomy and any form of cultural expressions inside and outside Galicia. He teaches at the High-Level Technician Degree in Administration and Finances at Leliadoura’s High School. At Raposiñas he administers the workshop and helps in almost every field.

Any cookies that may not be particularly necessary for the website to function and is used specifically to collect user personal data via analytics, ads, other embedded contents are termed as non-necessary cookies. It is mandatory to procure user consent prior to running these cookies on your website.